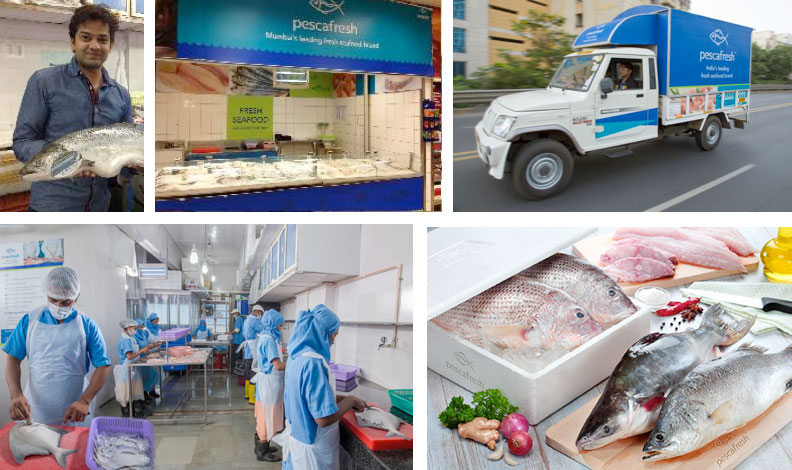 We are developing the Indian market with a bright, young Indian entrepreneur called Sangram Sarwant. Sangram is revolutionising fresh fish distribution in Mumbai and has a missionary enthusiasm about his quest to raise the standard of seafood available to his customers – a vision that top quality fresh seafood can be offered direct to customers through the Pescafresh home delivery network he is developing by bringing HACPP-based hygiene routines to his staff and premises.

Many months of preparation have gone into sourcing the freshest fish and creating new hygiene practices to provide a new offering to the premium seafood market of Mumbai – something that previously didn’t exist in India. The revolutionary feature is the replacement of the usual frozen fish offering with a fresh fish offering of particularly high quality served by staff and premises using hygiene standards new to India.

Pescafresh is bold enough to go the opposite way to everyone else. Not for the sake of being contrary but because he is simply following something he passionately believes in – that his customers deserve a better quality of seafood. He has rolled out his S.I.S. (shop in store) concept to retailers around Mumbai with a fantastic array of fresh, local sea fish. One of his high profile customers is Nido, Vicky Ratnani’s new restaurant, where we are delighted to see Loch Duart mentioned by name on the menu of such a highly regarded figure in Indian and, indeed, international cuisine.

Volumes are low to start but in the rapidly growing Indian consumer market, there is very bright future ahead for Pescafresh. The Mumbai operation has already been extended to Bangalore and Hydrabad, and Delhi is next on the list.

Loch Duart looks forward to accompanying Sangram Sarwant, his growing business and the fresh fish aficionados of India on this exciting journey.