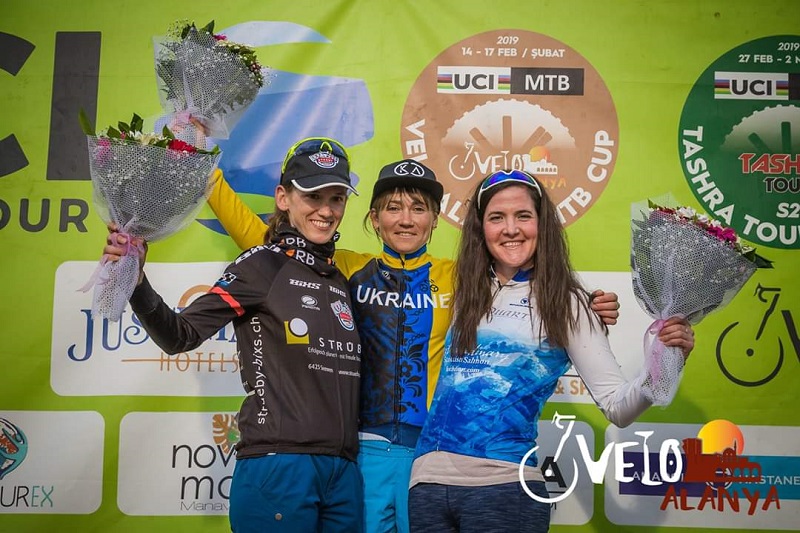 I love that pre-race anticipation on a start line and Mediterranean Epic go to town on it. Blaring music, a stunning beach backdrop, a guy on the mic getting more and more excited in undecipherable Spanish and people milling about, athletes warming up on rollers and everyone eyeballing each other. It’s brilliant! The only thing I don’t like about this stage race which I’d hoped they’d change for this year but but didn’t is that they set everyone off at the same time meaning you are swamped by Masters riders from the gun.

Immediately on stage 1, you are into a steep, hard climb, and immediately I felt the effects of the bike as I pushed hard on the pedals but could only watch as some of the woman seemed to drift away effortlessly from me and I was swamped by masters men. A bad workman always blames his tools right? And surely it’s the rider, not the bike?! Well, it’s exactly what I was thinking during that stage as I struggled on… surely a heavier bike designed for enduro racing not cross country would slow not me down as much as it felt like it was?! I was bouncing around quite a lot on the bike and it felt super draggy but still, maybe Lanzarote was a fluke?! Frustratingly, I couldn’t even use the bike for it’s designed intent on the descents as the master’s men who so easily schooled me on the climbs would walk many of the technical sections meaning queues and very slow going. I didn’t give up though and struggled on to finish 20 minutes down on the stage winner and 13th overall. It had been brilliant being greeted by Emma in the pits with a fresh bottle and gel and a cheery boost of encouragement and it certainly helped my mindset! The other positive was that I’d had a pretty solid training session dragging myself and the bike over 1500m worth of climbs in 3hr and 20 odd minutes! And tomorrow I’d be on my own bike… or so I thought. The bikes eventually arrived late afternoon but to my dismay, one of the cables had been damaged in transit rendering the gears unusable. Back to the race village mechanics I went to try and get it fixed with the only solution being that they put a completely new groupset on my bike as they didn’t have the cable required and I could collect it in the morning before Stage 2. It was another evening of toing and froing, on my feet until after 10 pm and really poor recovery and prep for stage 2 but positives… I was here and I was getting to race.

I’d remembered from last year that stage 2 had been particularly technical so I focused on the fact that the bike could be fun and useful on the long descents and I’d just be extra vocal with the master’s men clogging up the route and get passed them. The stage started and I had that familiar feeling of fighting the bike and pedals but just kept digging in and pushing on. As if I hadn’t been unlucky enough already, disaster struck again on one of the long descents and I got a puncture! I finally rolled into the feed zone in what felt like dead last, spotted the mechanics who I’d dealt with before and pretty much threw the bike at them begging for assistance. They too couldn’t get the tire off the rim, snapping a tire lever in the process but eventually wedged it off. I didn’t even bother checking the result after this but it was what it was but I’d been out for over four hours with around 1800m of climbing. That evening, again instead of focusing on rest and recovery, I was back at the bike shop but fortunately, to have my own bike repaired. Finally, it was good to go!

I love my bike, it’s a Genesis Mantle which is a British brand and I’ve just always gotten on very well with it but for stage 3, I really loved my bike! It felt like a feather and so responsive when I put power through the pedals compared to the borrowed bike which seemed to lose energy. I was buzzing on the start line! Today was the longest stage of 81km and 1500m of climbing and I was chomping at the bit to get racing.. It was complete night and day to the last 2 stages. I came through feed zone 1 in 2nd place, maybe a bit too enthusiastically, but enthusiastic and fired up nonetheless. The descents were free of traffic, the climbs were still brutal but quicker and I rolled over the finish line in a very happy 4th place with not much of a gap to 1st. Woohoo, I was back on it!

I remembered from last year that stage 4 was super steep. It was the shortest in distance at 50km or so but still had 1500m or so of climbing. The main part of the stage was a huge climb up to a peak of 750m that got steeper and steeper as it went. Last year I’d spewed at the top it had hurt so much but this year I felt completely different. It was just as steep as I’d remembered but I felt on top of the bike, I felt like I could grind up the climbs and I didn’t feel like I’d blown my doors. I also remembered that with the long up came a stunning technical trail down so I was able to focus on this. However, my last bit of bad luck came towards the bottom of the descent where I paid for my wild riding with a puncture. Fortunately, I was able to fix it with a gas can so I didn’t lose too much time but did lose contact. I finished in 6th but once again, elated that I’d pulled out another good result off the back of the two disaster stages. I can’t even explain what a relief it was to back up my Lanzarote result. I was also relieved for Emma who must have thought I was exaggerating when I tried to explain how different the bikes felt!

Whilst I hadn’t achieved the overall good result I’d quietly hoped for, off the back of my Lanzarote result, the things I did take away from this race were far more important and worthy. Firstly, I coped when things went wrong and I was really scared that I wouldn’t cope. I just had to get on with it and actually, having had such a tragic life-altering event happen a mere three months earlier, something like a bike not turning up and a puncture were just that, small bumps in the road that I just had to get on with. Plenty of adventures, stories, challenges, successes, experiences and learning for forthcoming races. And guess what arrived in Edinburgh on touch down?! Our bikes!